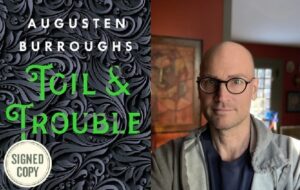 Augusten Burroughs will talk about his new memoir, Toil & Trouble, as part of the Mark My Words series. Burroughs has written frequently about his troubled family in Running with Scissors, Dry, Magical Thinking, Possible Side Effects, and A Wolf at the Table, all bestsellers. Running with Scissors was made into a 2006 film starring Annette Benning, Alec Baldwin, and Joseph Cross. Dry, his memoir of addiction and recovery, is in development as a Showtime series. His novel Sellevision is in development as a series on NBC. He is also creating an original prime-time series for CBS.

Burroughs writes of Toil & Trouble: “Augusten’s unusual sensitivities and abilities were recognized early in his childhood by his mother, a witch who came from a long line of witches. She instructed him daily in the art and science of The Craft, but she also instilled in him the belief that witchcraft was something misunderstood by the general public and therefore something never to be spoken of.”

Tickets are $50 and include a copy of Toil & Trouble. A book signing follows.

The Mark My Words series is sponsored by The Wish You Well Foundation.

Connecticut Public — WNPR is the media sponsor for the Mark My Words series.